People with functional neurological symptoms can have symptoms affecting the face. These are much more common than was thought even 10 or 15 years ago although in fact they have been recognised for over a century.

The commonest type of functional facial symptom is spasm of the muscles around one eye or in the lower half of the face.

Typically functional facial spasm occurs in episodes and affects one half of the face. Muscles around the eye (called orbicularis oculis) go in to spasm which leads to narrowing of the eye opening with the eyebrow lower on the affected side (see picture below)

When functional facial spasm affects the lower half of the face then the corner of the mouth may be pulled down and sometimes the jaw is pulled over (See pictures of Lucy). The mouth is pulled down because of spasm of a muscle called platysma – this is the muscle we all have under the skin at the front of our neck

Less commonmly the corner of the mouth may be pulled up. The photo on the right above is from 1918 and is of a world war one soldier with ‘shell shock’ who has functional facial spasm.

Im grateful to Lucy for consenting to her photos appearing on www.neurosymptoms.org. You can hear Lucy describing her symptoms on this BBC Radio 4 programme, Inside Health, broadcast in October.

These pictures show Lucy’s jaw tending to be pulled over to the right side of her mouth. In addition she has spasm of the platysma muscle on the right which is pulling her lip down on that side.

Click on the video below to see Lucy talking about her facial spasm. She also had some right arm and leg weakness. You can see that on the functional weakness page.

When the mouth is pulled down this can give the person with this problem an asymmetrical appearance that is often mistakenly interpreted as facial weakness. Doctors who do not know about functional facial spasm may interpret the symptoms as those of a stroke, even though this is a problem with muscle overactivity not muscle under activity as is typically seen in a stroke.

Although most episodes of functional facial spasm last minutes, it can last hours or in rare cases be there most of the time

Sometimes the tongue can be involved in the spasm too. Usually if this happens then the when the tongue is stuck out it points towards the same side as the facial spasm

The videos below are posted with the generous permission of Maria who has unusually persistent functional facial spasm on the right side of her face. She also has episodes of intermittent spasm on the left side which can be induced by contracting her facial muscles.

It’s important that the doctor making the diagnosis is familiar with other causes of facial spasm. One of the main differences is that spasm from the conditions listed below is usually quite brief (ie lasting seconds) whereas in functional facial spasm the overactivity lasts minutes or longer. There are other differences that an experienced neurologist can look for such as the pattern of spasm, triggering factors and associated symptoms.

This is rare. One of the situations this might be seen in is when someone has a functional speech disorder. Some patients find that they can’t close their mouth properly when they speak and this may be interpreted as facial weakness.

In functional facial spasm although the muscle around the eye is overactive the eyelid itself is not usually affected. But sometimes a droopy eyelid, called ptosis (pronounced TOESIS) can be the result of a functional neurological disorder. Particular care is required in making this diagnosis as there are many causes of ptosis such as myasthenia gravis, lax skin in the eyelid and brain diseases.

Occasionally the eyelids, instead of being weak as they are in ptosis, may keep shutting and be hard for the patient to open. By far the commonest cause of this is a condition called Blepharospasm which is a movement disorder that does not relate to functional disorders. But rarely this symptom can occur as a functional disorder. It can be particularly disabling since obviously if both eyelids are closed the person experiencing this symptom cannot see properly

Again, expertise, preferably from a doctor familiar with the manifestations of blepharospasm is essential.

It can make a difference to some people to know that the problem is muscle overactivity not underactivity.

Recognising triggers like stretching the muscles in your face or in some people sensitivity to light can be helpful.

If the abnormal movements are triggered by ‘stretching’ your facial muscles then it can be tempting to avoid that activity. Instead it might be worth trying to induce the movement deliberately so that your brain can become ‘desensitised’ to it, in a way that you are controlling (rather than being at the mercy of random episodes)

Likewise if light sensitivity is the issue then gradually exposing the eye to more and more light can be helpful.

Its quite common for patients with functional facial spasm to have other functional symptoms especially functional limb weakness. 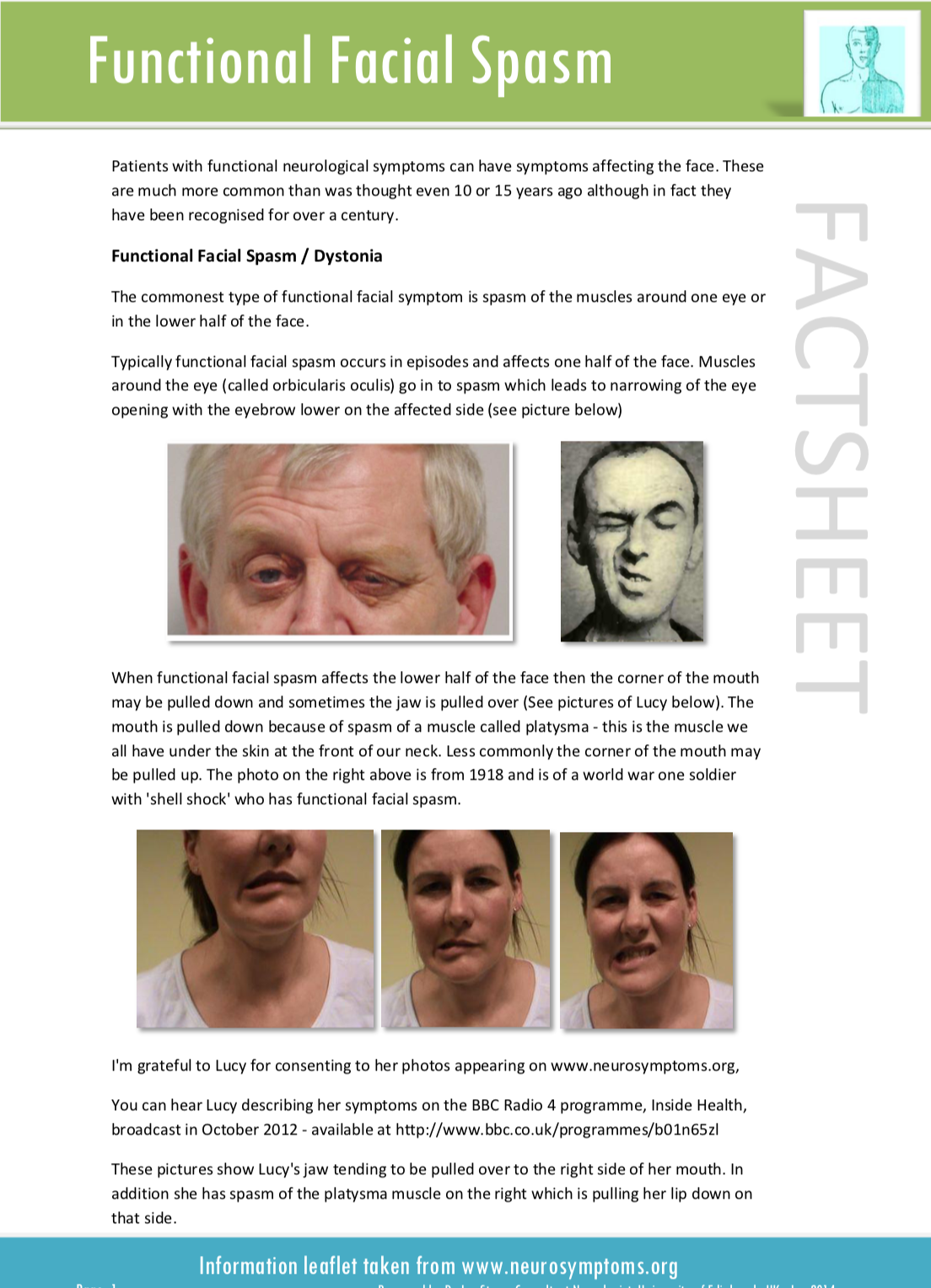