Post-concussion syndrome/ Post -Traumatic Syndrome is a description given to a cluster of physical and cognitive symptoms that sometimes occurs after minor head injury. These include

Our University of Edinburgh research group made a new website specifically for patients with mild head injury or symptoms after a minor knock to the head. CLICK BELOW or go to www.headinjurysymptoms.org

In this situation when doctors refer to minor head injury they are not talking about any knock to the head. A minor head injury normally means that there was a brief loss of consciousness (less than 15 minutes) and little in the way of memory loss after the accident (less than one hour).

Concussion doesnt have a universally agreed definition but it generally means a knock to the head without loss of consciousness or amnesia which results in symptoms immediately afterwards.

In the first few hours and days after a concussion it is normal to experience some dizziness, poor concentration and other symptoms listed above.

But we know from large studies that after a mild head injury or concussion, symptoms usually settle within days, weeks, or at most several months.

There are sometimes specific reasons for some symptoms.

For example, a knock to the head of any sort can dislodge ‘grit’ in the balance parts of the ear causing dizziness (a condition called benign paroxysmal positional vertigo (BPPV)). There are other potential complications of head injury that a doctor may need to look for but usually there is no specific reason found for symptoms and tests such as MRI brain scanning are normal.

The brain has a good capacity to recover from knocks to the head like this, as long as they don’t keep happening

In post-concussion syndrome symptoms persist longer than would be expected from the nature of the injury. They often get WORSE over time whereas symptoms directly related to a head injury are worst at the beginning and slowly improve.

What happens is that after experiencing an injury, ‘volume knobs’ in pathways in the nervous system become ‘turned up’. These include pain pathways, as well as sensory pathways involved in symptoms like dizziness. The brain is usually very good at filtering out sensations so that we can concentrate on the ones that we need. After a bang on the head this process can go wrong for a variety of reasons additional pain signals and sensory signals can get through.

Normally those ‘volume knobs’ get turned down again and the ‘brain filters’ are restored as you slowly recover but in post-concussion syndrome they stay turned up, or even become increased further over time.

If you add in to this mix, the shock of having a blow to the head and the worry that there is some form of brain damage, it’s not hard to see how this could make things worse

But as with all functional disorders, you don’t need to be worried or low to have them, it’s just that being worried or low will tend to make them worse.

So is post concussion syndrome caused by brain damage then?

In a nutshell, no.

It is TRIGGERED by a blow to the head, during which there may have been some minimal damage to the brain. But don’t forget that adults lose brain cells every day.

If it was a minor brain injury, by the time 8-12 weeks have gone by its very unlikely that any of the symptoms that are left are still caused by brain damage. Instead they arise because of abnormal nervous system and brain functioning. In other words they are functional neurological symptoms.

The symptoms of dizziness, poor concentration, fatigue are identical to those seen in patients with functional disorders who have not had blow to the head. So the advice about them on this website is therefore relevant to you if this is your situation.

In one of the most remarkable pieces of research on this topic in recent years a group in Australia showed that the proportion of people seen in hospital with a minor blow to the head who developed post concussion symptoms was exactly the same as people seen in hospital with a blow to their leg, arm or other part of the body excluding the head. (Meares et al. Mild traumatic brain injury does not predict acute postconcussion syndrome. JNNP 2008;79:300–6)

The evidence suggests that there is a “post-traumatic syndrome” in which people develop predominantly functional, and of course genuine, symptoms. Its further evidence that ‘brain damage’ which is what people are understandably normally worried about – is not the cause of the problem.

An approach to the treatment of post-concussion syndrome

Most of the symptoms of post-concussion syndrome can be approached as functional symptoms occurring without a knock to the head.

There are several specific aspects to treatment of post-concussion syndrome to be aware of:

This website neither encourages nor discourages compensation claims but understanding how they can interact with post-concussion symptoms can be helpful.

There is more information on Post-Concussion Syndrome at these links 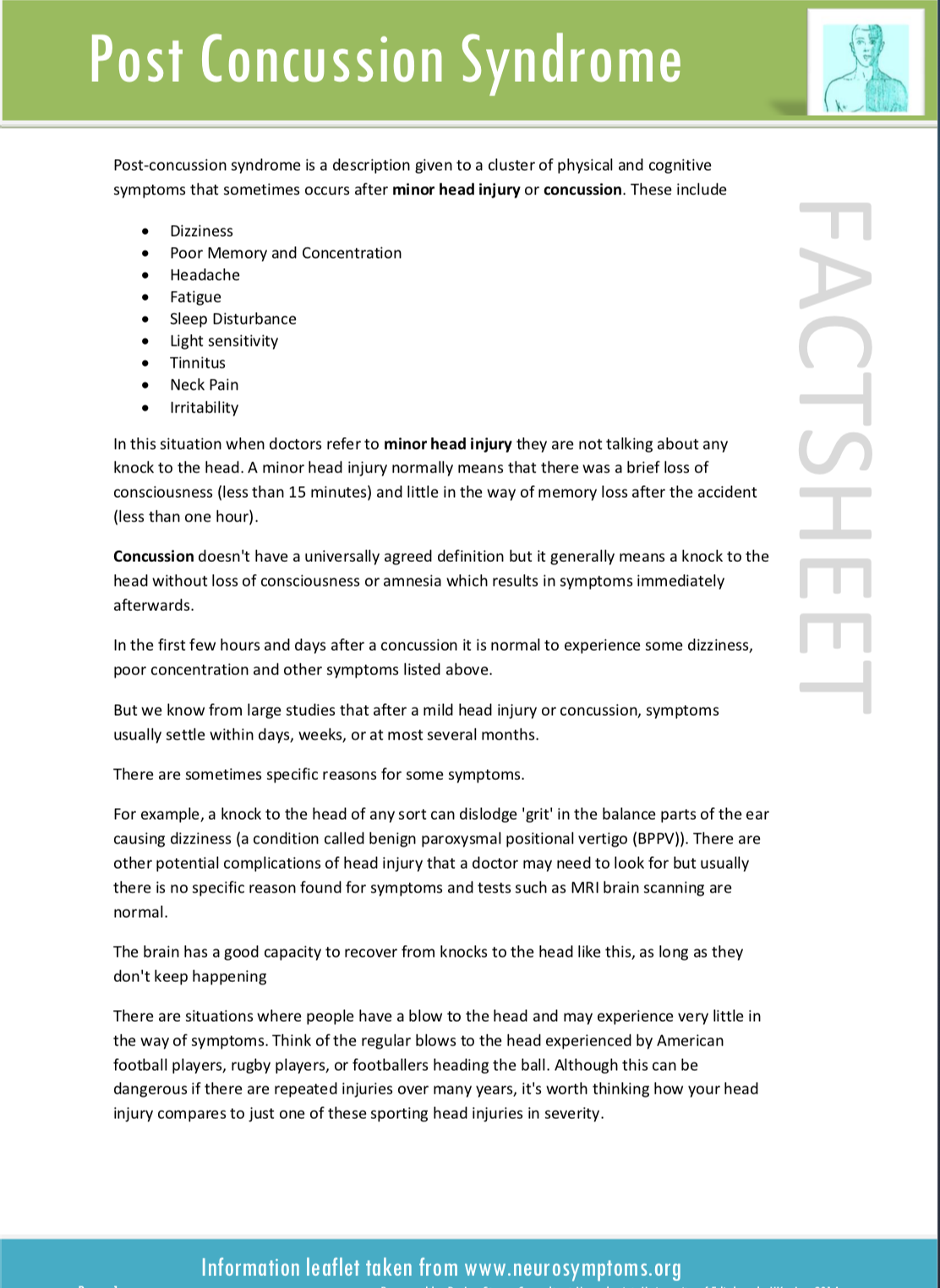