A “Drop attack” is the medical term for a sudden fall to the ground without an obvious ‘blackout’. A typical drop attack is experienced when walking or standing and without any warning. Drop attacks are frightening and often lead to injuries, especially to knees, forearms and face.

There are many causes of drop attacks, such as simple falls, low blood pressure and epilepsy, but quite often, especially in people under the age of 65, it turns out that drop attacks are a type of functional neurological symptom. They are sometimes worth seeing as a form of very brief dissociative (non-epileptic attack)

What are the typical features of drop attacks?

Over 90% of drop attacks, for reasons that are not understood at all, occur in women although men can develop the problem. The average age of onset is between 45 and 55 which is a bit older than some of the other symptoms on this website but they can happen at any age.

How do you diagnose Drop Attacks?

Drop attacks are actually a very characteristic problem. If someone has all the elements described above then it’s actually very unlikely there will be another cause such as epilepsy or a heart condition.

In older people, drop attacks can happen due to a sudden lowering of blood pressure. Doctors sometimes use the terms syncope, vasovagal syncope or carotid sinus hypersensitivity to describe various types of fainting related to low blood pressure.

You may have a heart tracing (ECG) and possibly a longer heart tracing (24 hour or longer ECG) to try to capture an attack. If you don’t already have another form of epilepsy it’s extremely unusual for isolated drop attacks to be due to epilepsy.

Sometimes drop attacks happen because of knee or hip instability, or because the person keeps tripping over, although usually in these cases the person DOES remember the fall, often with a memory of the whole thing happening in slow motion.

Will I come to serious harm?

Injuries are part and parcel of drop attacks. These can be as bad as broken bones or teeth, but more serious or life-threatening injuries are not seen with functional drop attacks even in people having many attacks a day. This is different to epilepsy or even faints where serious injury does sometimes sadly happen. This is something to do with the nature of drop attacks not relating to a true loss of consciousness in which the body is completely unprotected. It’s helpful to think of it more like a loss of AWARENESS, where the body is partially protected. This explains why people with drop attacks tend to crumple rather than topple, and sometimes (but not always) are able to avoid furniture and other obstacles when falling.

Why do drop attacks happen?

For information in general about how and why functional symptoms happen look on these pages.

There is still a lot we don’t understand about drop attacks. In some people, they really are ‘cryptogenic’ (ie doctors really have no idea why they happen and there is no clear evidence that they are functional either).

But in other people, it’s possible to see a pattern that fits quite well into those seen in other functional disorders. Some evidence for this includes the following

• Some people with functional limb weakness have drop attacks which are triggered by the leg that is normally weak, ‘giving way’. Although these may be just described as falls, it’s often the case that the person feels a slight weakness and the next thing they know they are on the ground having fallen. This is more of a ‘drop attack’

• Many people with drop attacks feel strange when they come round. Sometimes this is a ‘spaced out’ ‘there but not there’ feeling which is called dissociation. (see page for more description). In some people, this is a clue that dissociation is the reason for the drop attack in the first place.

• Some people with drop attacks only have them when they are outside of their house. If the attacks were due to a heart condition or epilepsy they would happen randomly.

• Working with this “FND” model of drop attacks can also lead to successful treatment in some patients, although drop attacks are generally a hard problem to treat.

Understanding that drop attacks are a very typical clinical problem that an experienced doctor can immediately recognise, and that actually very little else in medicine looks or sounds anything like them can be a good start.

Are there certain situations when drop attacks happen?
A minority of patients report only having drop attacks when outside the house, in the same way that people with panic attacks tend to have attacks only when away from the security of their home.

If you don’t have any warning symptoms
As with dissociative attacks, sometimes although the patient doesn’t experience any warning symptoms, those around them like friends and family do sometimes notice some changes just before. These include ‘going quiet’ or looking ‘spaced out’, with a ‘glazed’ expression or as if they are ‘not there’. If your friends and family can spot these kinds of dissociative symptoms, ask them to tell you as it may help you recognise the feeling of dissociation that you are looking for.

It sounds a bit weird but in some cases, it seems that when people dissociate, they also dissociate from the feeling of being spaced out when it happens. So they do need a bit of help learning to recognise that feeling.

When none of the above apply

In the majority of patients with drop attacks, there are no warning symptoms – they can’t be found even when looking hard for them by anyone, the attacks happen anywhere including at home and so it feels as if there is no ‘way in’ to treatment. This is often the case even when the patient fully accepts and understands the diagnosis. Treatment approaches worth considering include:

Medication
Some of the medications described on the treatment – medication page may be worth trying. These include medicines like Amitryptiline and Clomipramine. These are sometimes used to treat another kind of falls called Cataplexy and there are anecdotal reports of success.

Talking treatments
If your drop attacks have come to dominate your life you may be locked in a vicious circle whereby the constant worry of when the next attack will be and what injury you will have next, are actually making the problem worse and keeping it going. Talking openly about this with a doctor or psychologist can sometimes be helpful. A psychologist might use a similar approach to that used for panic attacks, although the disorders are different. This may involve doing things such as gradually experimenting with going out on your own or learning how to avoid acute feelings of embarrassment and accept help if you do fall in a public place going over your fears about serious injury and looking at whether these are realistic.

In this situation, you need the understanding of family, friends and health professionals to live with the problem as best as possible. Talk over how you would like people to behave if you have an attack. Many people can manage to work and have a social life despite frequent drop attacks.

In the UK there is no specific guidance about drop attacks. This is something to discuss with your doctor. 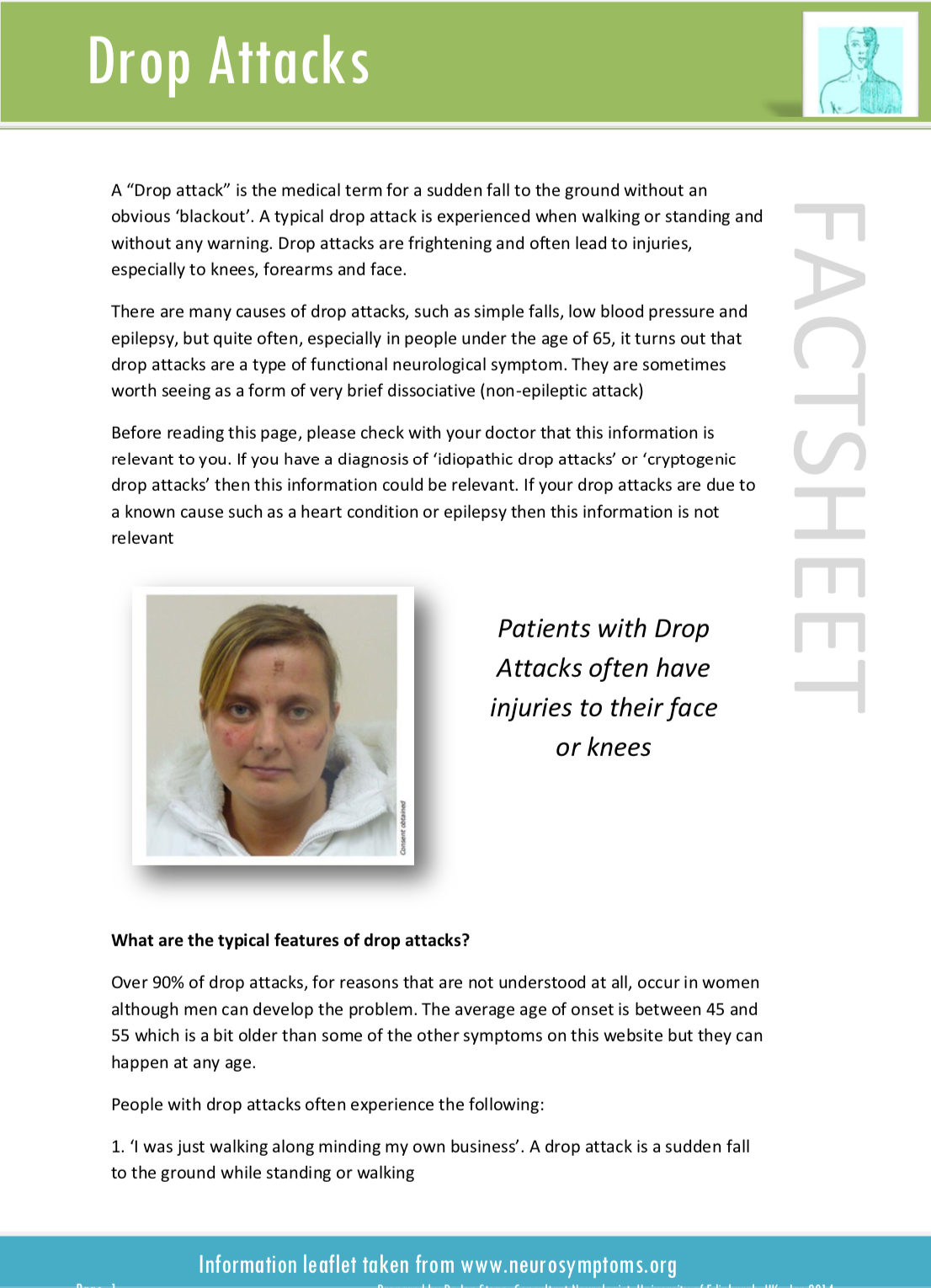