What is Functional Jerks and Twitches (Myoclonus)?

Functional myoclonus refers to sudden jerky or shock-like movements that occur as part of a functional movement disorder.

Myoclonus is a symptom found in a wide range of neurological diseases as well as some normal states.

Most people have had the experience of jumping or jerking as they are dropping off to sleep. These movements are called ‘hypnic jerks’.

Most people are also familiar with the random body ‘shudder’ that some people get. This is sometimes described as ‘walking on someone’s grave’ because of the way it moves quickly through the body.

The occasional hypnic jerk or a body shudder is normal. But in functional myoclonus the jerks become a frequent and disabling problem.

There may be jerks of the arms or legs, or quite commonly there is jerking in the body. The movements cannot be controlled (ie they are involuntary.

How does it begin?

Functional myoclonus often begins quite suddenly (in around two-thirds of cases) but may be gradual. It affects patients somewhat later than some of the other symptoms described on this website. For example in one series of 35 patients the average age it started was 45. It may follow on from one of the following situations

The diagnosis of functional myoclonus is usually made by a neurologist. It can be a difficult diagnosis to make because it requires expert knowledge of the full range of jumps and jerks due to neurological disease, many of which are unusual.

Over half of patients with functional myoclonus describe warning symptoms before some of their jerks. These may last just seconds or sometimes minutes. Some patients describe a rising sense of tension which somehow the jerk gets rid of temporarily. So they don’t want to have the jerk but it is doing something useful, some of the time. Understanding this can be useful in treatment.

If you don’t get any warning then don’t be put off by the paragraph above. It doesn’t apply to everyone with functional myoclonus.

Have a look through the pages on treatment but here are some specific points.

Do you have confidence in the diagnosis?

It is essential that you feel that you have the correct diagnosis. If you don’t it will be hard to put into practice the rehabilitation techniques suggested here.

If you don’t feel that you have functional myoclonus you need to look at what basis the diagnosis has been made. You should have some of the clinical features described above. If you do, why don’t you have confidence in the diagnosis you have been given?

You do not need to be stressed to have functional myoclonus. In fact, functional myoclonus is often most noticeable when people are relaxed or not thinking about anything in particular. Perhaps you rejected the diagnosis because the doctor suggested it was “stress-related”? – there may have been a misunderstanding if that was the case.

We know that many patients with functional myoclonus do have stress as a cause of their symptoms, but many don’t. So whether you have been stressed or not is not relevant to the diagnosis.

The treatment of functional myoclonus is quite challenging. Usually, the problem has been going on for some time and has become a ‘habit’ that the brain has got into. The following may be worth considering

Unfortunately, many patients with functional myoclonus find that it is a problem which persists. But it’s certainly worth trying to improve it. Even knowing what it is can give people valuable peace of mind.

A note on Benign Muscle twitches – these are sometimes called ‘benign fasciculations’.

Benign fasciculations are not usually considered a functional disorder, but they are benign, cause concern and may coexist with some of the other symptoms on this website which is why I mention them

Most people have small twitches from time to time, especially around the eye and in the fingers. Such twitching is so common that to experience it occasionally is normal.

However, some people find that they experience more and more of this muscle twitching until it is present in multiple areas of their body, for most of the time. This can lead to understandable anxiety about what is causing the symptoms, which in turn makes the twitching even worse.

Generalised benign twitching like this is known to occur more frequently in medical students and doctors who, on developing these symptoms, worry that they might have motor neurone disease (known in the USA as ALS).

As with functional symptoms, knowing what the problem is can help it to settle spontaneously.

This is an article written by a doctor who experienced benign fasciculations and health anxiety which subsequently resolved with treatment. 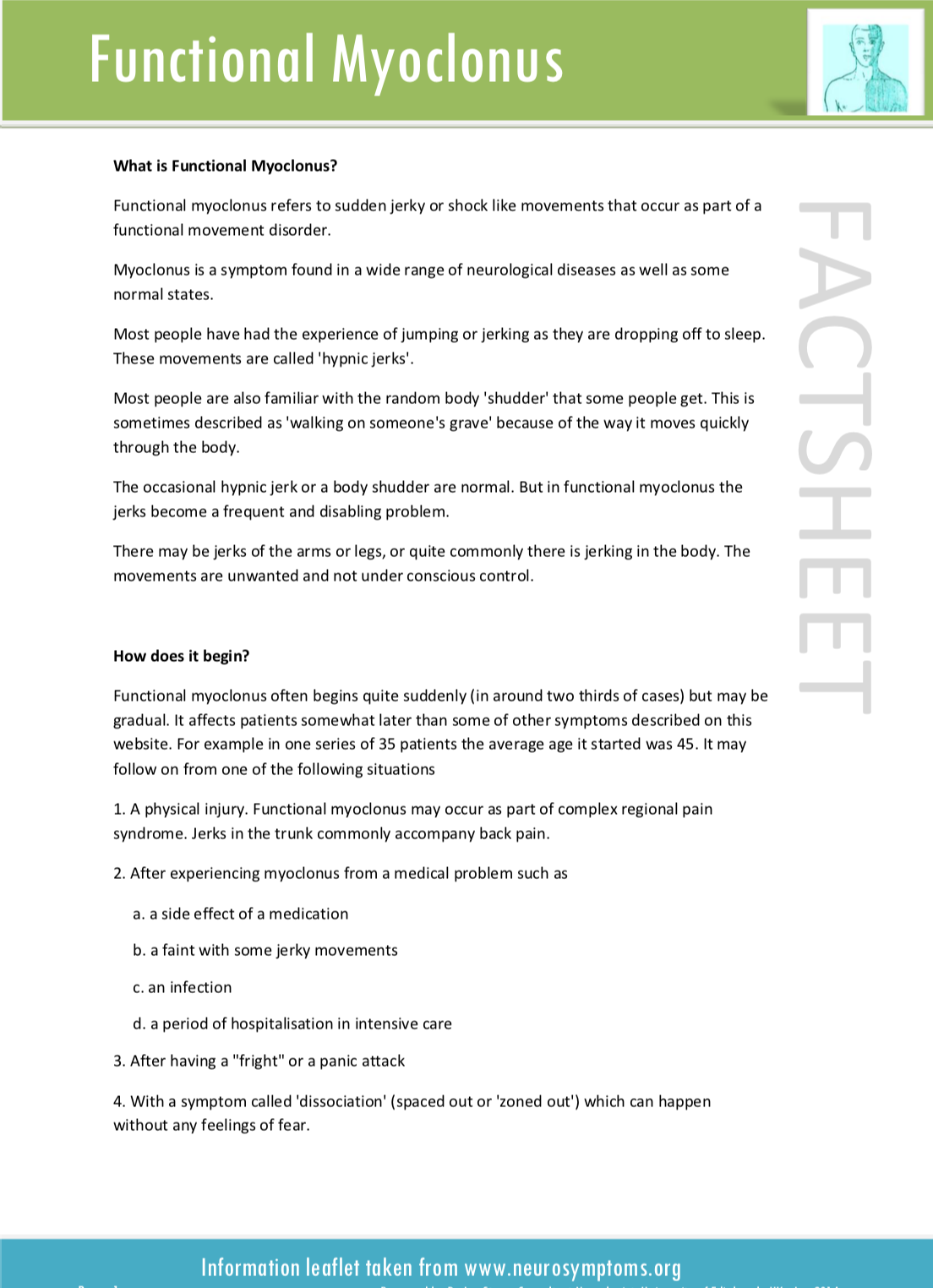