This page and fact sheet were written with colleagues listed at the end with special thanks to Tammy Hedderley, Isobel Heyman and Christos Ganos.

This factsheet aims to give you an introduction to functional tics which may help you and your health professional approach the problem better. It is not a factsheet about Tourette syndrome, but we will discuss the overlap.

What are functional tics and how are they diagnosed?

There are many similarities in the symptoms and treatment for functional tics, and tics seen in other conditions (such as in Tourette syndrome) but some important differences too.

In early childhood, when children are around 4 or 5 years old, subtle tics are quite common. In a typical school of 400 pupils, around 10-20 children will have tics of some sort. As children mature, tics naturally improve and the number of people in a secondary school would be less than this and around 1 %. Tourette syndrome is a condition that begins in early childhood. This is one of the main differences to functional tics which usually begin after the age of 10 or 11 and can be seen for the first time in adults as well.

Functional tics are a type of Functional Neurological Disorder (FND). FND is described in more detail at the neurosymptoms.org website. It broadly describes a disorder of movement and sensation where there is a particular problem with voluntary movement, but not of automatic movement.

Tic-attacks refer to continuous tics and are especially found in younger people with a mixture of Tourette syndrome and functional tics. You can read more on the Tourette Action site.

Difference and Similarities between Functional Tics and Tourette Syndrome

*Applies to children over 8. FND symptoms may include seizures or mobility problems. With thanks to Christos Ganos and colleagues for the idea for this diagram (reference 2).

As you can see from this diagram, making a diagnosis of functional tics is not easy. It usually requires a doctor who is very familiar with Tourette syndrome and other causes of tics. Both FND and Tourette syndrome are disorders of voluntary movement, and both can be altered by distraction or suggestion. Like most types of FND, making a diagnosis of functional tics is a clinical diagnosis which is made on the basis of a combination of typical features.

Sarah is a 13 year old with an interest in dance, art and drama. Over the last 4 weeks she has experienced a sudden onset of disabling, continuous motor tics in her arms and legs. They have been associated with yelping noises and some animal sounds as well as a tendency to swear at her younger sister and lash out in a seemingly uncontrollable manner. This experience has been really upsetting for her and she’d been to the emergency department a few times, but no one seemed to know what to do. She has felt embarrassed to speak to her friends.

Sarah has a younger brother aged 5 years with an autism spectrum diagnosis. She describes herself as shy and socially anxious and her parents say she is ‘a perfectionist’.

The tics have led to her being off school and she has spent a lot of time alone in her bedroom. She has spent time viewing social media sites and because of her symptoms. She has been looking up Tourette sites. Recently she had the courage to make a TikTok video about her experience. She has an uncle with some tics and OCD.

Looking back Sarah did have some subtle tics when she was about 5 years old, but everyone thought they had settled down and no one had noticed any for many years.

In Sarah’s case, her tics had features mainly typical of functional tics. They were especially of her arms and body. She couldn’t ‘suppress’ the tics, even for a few seconds and she didn’t have the usual ‘warning’ urge that people with Tourette syndrome have. The fact they had started really suddenly and severely at the age of 13 was also typical of functional tics and not of Tourette syndrome.

Sarah’s doctors thought it was likely that she had experienced mild tics as a child which had left her vulnerable to develop functional tics.

As they went through treatment, they discovered that some things at school had been stressful with peer pressure and Sarah was feeling panicky about her schoolwork, even though she was an excellent student.

Sarah had psychological therapy which helped her to talk about her feelings and manage feelings of worry and panic. She also learnt techniques that helped her focus away from her body when the tics were bad and gradually over time this helped the movements to improve, and she was able to return to school. She still had the odd tic from time to time, but this was manageable.

What research has been done on functional tics?

Functional tics have been increasingly recognised by experts in the last few years. Now several groups around the world have published their experience with diagnosing and treating functional tics, but we are still learning more about them and how best we should approach their treatment.

You can see in these research papers below, doctors sometimes have used the term ‘psychogenic’ tics. This term has fallen out of favour as researchers in FND realised that it was a condition of the brain (neurology) as well as the mind (psychology).

Over the course of 2020 and 2021, a number of doctors specialising in tic disorders have noticed that more people, especially teenagers, are presenting with functional tics. Its not clear why this is. It could be because it was a stressful time for many people. There is no evidence that its directly related to covid infection or vaccines.

How and why do functional tics occur?

In FND it seems as though the brain’s focus of attention switches involuntarily towards the body. This switch of attention seems to be able to trigger abnormal movements (like functional tics) and also can make movements the person actually wants to make more difficult for them to do (so people with functional tics can experience a temporary block of voluntary movement). Sometimes the switch of attention towards the body heightens the perception of internal sensations or worries and thoughts about experiencing tics/tic-like attacks may trigger and maintain the episodes. Clinical experience suggests that people with functional ticsmay become more vulnerable to tics if they spend a lot of time watching someone with tics. Tourette syndrome, however, can’t

be induced by watching other people have tics. This has led doctors to wonder if exposure to social media sites showing tics could inadvertently increase functional tics in the observer.

At night when going to bed when many people have jerky movements as they drop off to sleep (hypnic jerks) which could also help shape brain pathways that lead to functional tics.

We have talked here about stress and psychological models, but functional tics do involve the brain too. People with them can’t just ‘reach’ in to their own brain and switch them off.

Social media platforms have helped people with disabilities including people with tics find a way to share experiences. Some people with functional tics wouldn’t necessarily regard it as a problem, if for example everyone had tics, then it wouldn’t trouble them. There are important conversations here about recognising differences between people. Patient advocates with other ‘conditions’ like autism and deafness have also helped the general public to see that just because something is different doesn’t always mean it needs a ‘treatment’

However, for most people, functional tics are distressing, especially when they appear out of the blue, and thinking about treatment is the right thing to do.

As with all types of FND it’s really important that you can meet a health professional who helps explain why they think you have functional tics, and whether in your case they are happening alone, or whether they are happening alongside Tourette syndrome. Everyone needs understanding and to know that health professionals treating them realise that you are not in control of these movements and that you want them to improve.

Treatment of functional tics is similar to other types of FND. It involves recognising that there are patterns of movement in the brain that have become ‘stuck’ and working out if there are techniques, either using psychological therapy or physiotherapy to help ‘unstick’ them.

Psychological therapy for Functional Tics should be tailored to the individual. There have been no research studies to help us know the best and most effective treatments for Functional Tics. Cognitive behaviour therapy includes education, understanding mind and body symptoms especially anxiety, modifying behaviour of yourself and others in association with tics (see below), and gradually increasing activities despite tics.

Other psychological therapies, which focus more on understanding how personal experiences change the way you relate to your own feelings and other people (called interpersonal or psychodynamic psychotherapy) may also be helpful, especially in adults.

Useful components of psychological therapies may include:

Some people respond to being taught movement as a way of focusing attention on other parts of their body.  A physiotherapist familiar with FND may be able to help with exercises as part of your treatment.

What about medication used for tics?

Medication like clonidine or aripiprazole is sometimes used for Tourette syndrome.

Experts in tics agree that this kind of medicine is NOT helpful for people with functional tics.

Sometimes medications for anxiety, obsessive symptoms or depression can be useful in some people with functional tics when those difficulties are present.

Looking at the bigger picture

Some people with functional tics have them as part of a ‘bigger picture’ of ill health.

Some people with functional tics have other types of FND symptom such as seizures or mobility problems.

In younger people especially functional tics can be so frequent that they have ‘tic-attacks’ which start to merge with the kinds of seizures or movement disorders we see in FND.

Other functional disorders leading to pain or fatigue or other medical conditions like joint hypermobility may be aggravating the situation.

As with all FND, some people do have anxiety or depression. Sometimes that is present for other reasons, or sometimes worsened by the condition.

Many people who have FND have NONE of these other health problems so please don’t be put off if this section doesn’t apply to you. But if it does, it may be worth spending time with a health professional, who understands these disorders to see how these conditions may relate to each other.

Many thanks to the following colleagues who suggested and co-wrote this material: 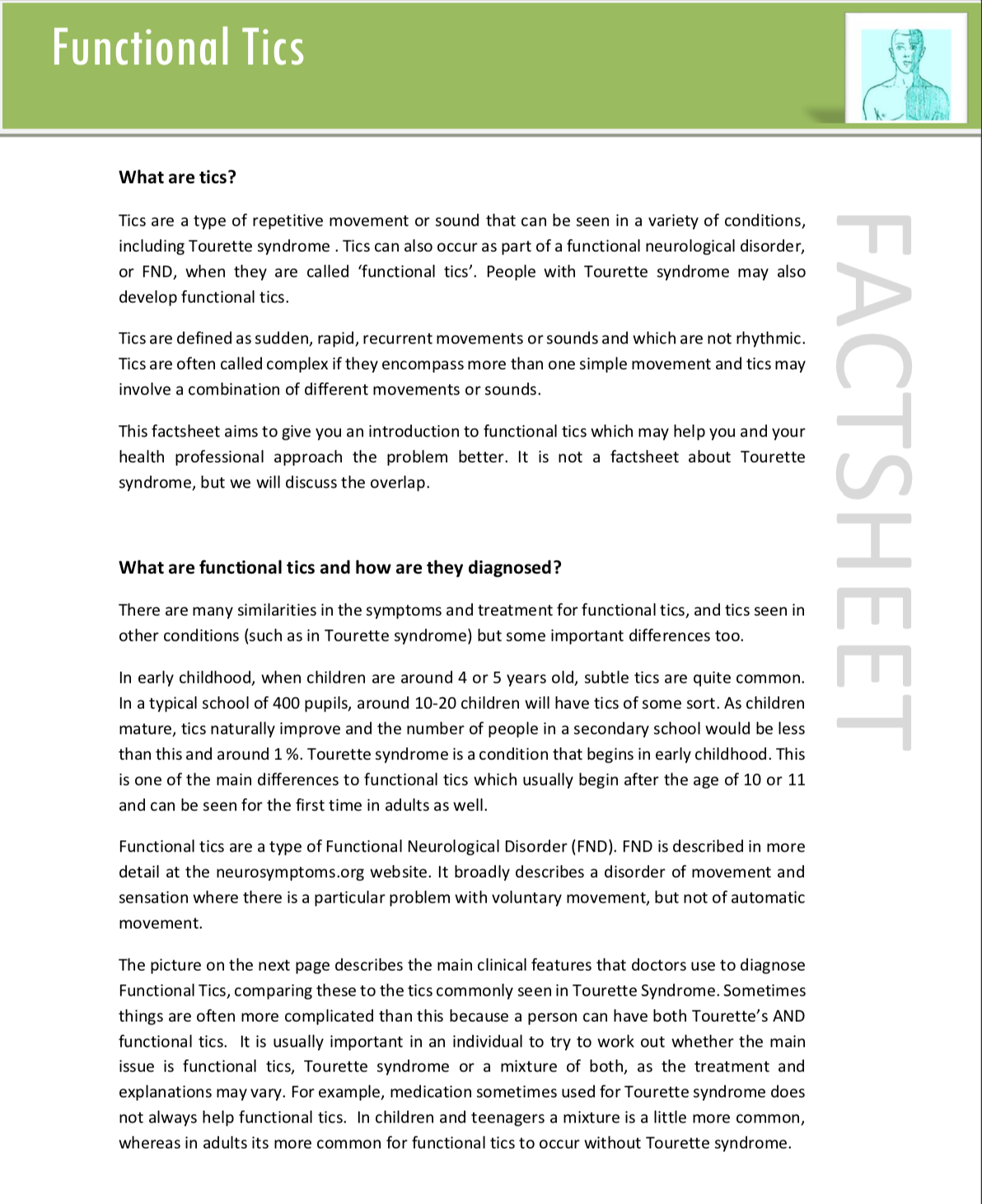