The commonest functional speech and swallowing symptoms are:

Slurred speech (dysarthria) might be sometimes normal and sometimes not. It may sound a bit like you are ‘drunk’ even though you have had nothing to drink. If it gets worse with increasing tiredness your neurologists will often consider the diagnosis of myasthenia gravis, but it does also occur as a functional symptom.

People who have never had a stutter before may develop an acquired stutter. Speech may be hesitant, often with gaps in the middle of words rather than at the ends of words. There might be hesitancy at the start of every single word. Alternatively there may be a ‘telegrammatic’ type of speech in which words like ‘and’ or ‘the’ are missed out from the sentence

This is really a ‘thinking’ (cognitive) symptom more than a speech symptom. You may find that:

This sounds like the kind of speech people have when they have a sore throat (laryngitis)  except it is not due to a sore throat or any other abnormality visible on the vocal cords and lasts for much longer. This is often called functional dysphonia. It is usually investigated by an Ear, Nose and Throat doctor (ENT, Otolaryngology) to make sure there is no identifiable cause. It may come and go and sometimes may even be triggered by a bout of laryngitis, but the vocal cords ‘forget to work’ properly after the virus has gone.

Occasionally people can lose their speech completely, this is called functional aphonia. Sometimes it will feel easier to speak in some situations than others.

Foreign Accent Syndrome. Another rare functional speech problem is called foreign accent syndrome. This can be caused by a variety of neurological conditions but can also be a functional neurological symptom. There are two closed facebook groups here and here run by patients with this problem. There is also a site about foreign accent syndrome run by Bill Katz at the University of Texas at Dallas.

Typically, if a person with FND has related swallowing problems they will experience a sensation of something stuck in the upper part of their throat. This can occur even when they are not swallowing anything but can also make swallowing difficult. This symptom is often called globus or globus pharyngis. Swallowing problems are usually first investigated by an Ear, Nose and Throat doctor (ENT, Otolaryngology) to make sure there is no identifiable cause. People with globus quite commonly have acid reflux that is helpful to treat as well, although is not the whole cause of the symptom.

There are many causes of cough. Functional cough may be a loud barking cough or a tickly ‘hypersensitive’ cough. Cough is usually first investigated by a respiratory doctor to make sure there is no other respiratory disorder present.

Why are my tests normal?

In these kinds of speech and swallowing problems all the parts of the nervous system are there, they are just not working properly at certain times. 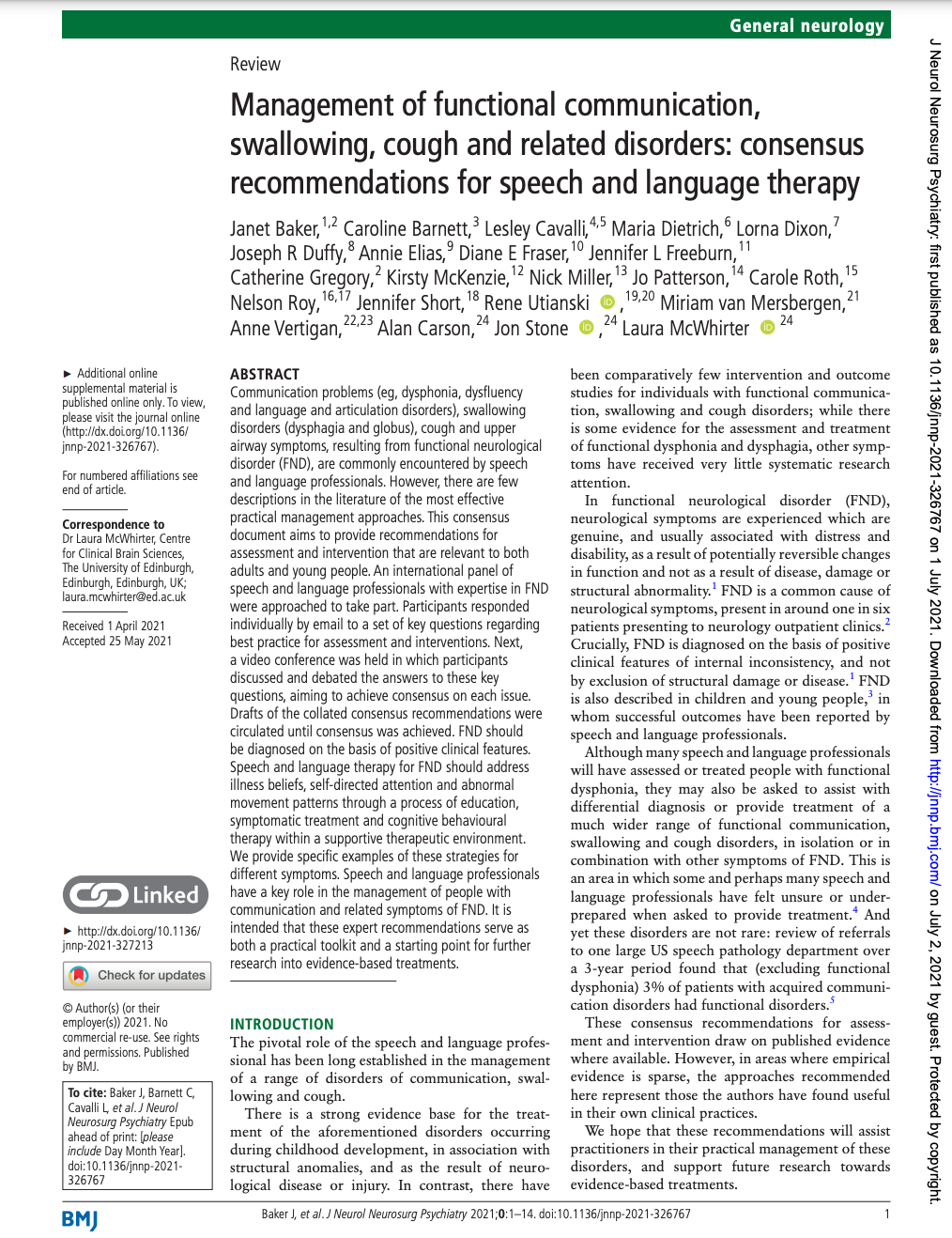